A boat carrying dozens of migrants, including Ghanaian, bound for Europe capsized in the Mediterranean Sea off Libya and at least 45 people drowned or were missing and presumed dead, the U.N has said.

The capsizing, which marked the largest number of fatalities in a single shipwreck off the coast of the North African country this year, happened Monday when the engine exploded, U.N. officials said. The boat, carrying at least 82 migrants, then capsized.

Thirty-seven survivors, mainly from Senegal, Mali, Chad and Ghana, were rescued by local fishermen and later detained by Libyan officials onshore, according to a joint statement by the International Organization for Migration and the U.N. refugee agency.

The survivors reported 45 people, including five children, had drowned off the coast of the western town of Zuwara, the statement said.

Alarm Phone, an independent support group for migrants crossing the Mediterranean, said it received a call Saturday from someone on a migrant vessel “panicking and screaming” that passengers were about to die.

The migrants, among them five women, two of them pregnant, said the boat engine had stopped working and they did not have any food or water, the group said. Alarm Phone said it alerted Libyan, Maltese, Italian and Tunisian authorities and provided them with relevant details on the boat.

It was not immediately clear that this was the same vessel that capsized off Zuwara.

Alarm Phone said the last time it was in contact with the boat was late Saturday.

“We urge states to swiftly respond to these incidents,” the U.N. agencies said. “Delays recorded in recent months, and failure to assist, are unacceptable and put lives at avoidable risk.”

The shipwreck was the latest maritime disaster involving migrants seeking a better life in Europe. In June, a dozen people were missing and feared drowned off the coastal town of Zawiya, about 48 kilometers (30 miles) west of the capital, Tripoli.

Libya, which descended into chaos following the 2011 uprising that toppled and killed longtime leader, Muammar Gadhafi, has emerged as a major transit point for African and Arab migrants fleeing war and poverty to Europe.

Most migrants make the perilous journey in ill-equipped and unsafe rubber boats. The IOM said in March that its estimated death toll among migrants who tried to cross the Mediterranean passed the “grim milestone” of 20,000 deaths since 2014.

More than 7,000 migrants were intercepted by Libya´s coast guard and returned to Libya so far this year, and at least 302 migrants and refugees have perished since the beginning of 2020, according the two U.N. agencies. 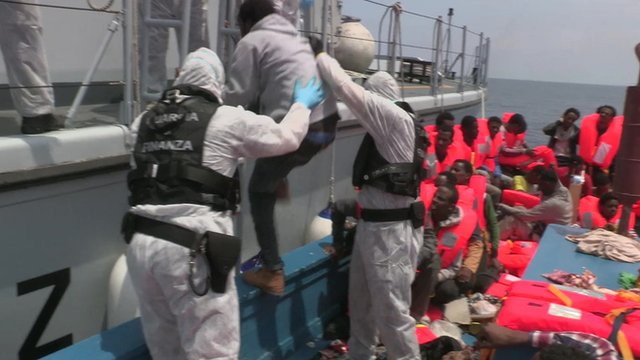 In recent years, the European Union has partnered with the coast guard and other Libyan forces to stop the flow of migrants.

Rights groups say those efforts have left migrants at the mercy of brutal armed groups or confined in squalid and overcrowded detention centers that lack adequate food and water.

The EU agreed earlier this year to end an anti-migrant smuggler operation involving only surveillance aircraft and instead deploy military ships to concentrate on upholding a widely flouted U.N. arms embargo that´s considered key to winding down Libya´s relentless war.