FACT-CHECK: CAF directs all football matches be played without spectators?

Following the return of top-flight football in Ghana, after it was suspended in March due to the outbreak of COVID-19, a Ghanaian football administrator and the General Manager of Dreams Football Club, Ameenu Shardow is contesting why football fans are not being allowed into stadiums.

This comes after Ghana’s Ministry of Youth and Sports instructed that all sporting events be played behind closed doors in line with a directive from the Confederation of African Football (CAF). 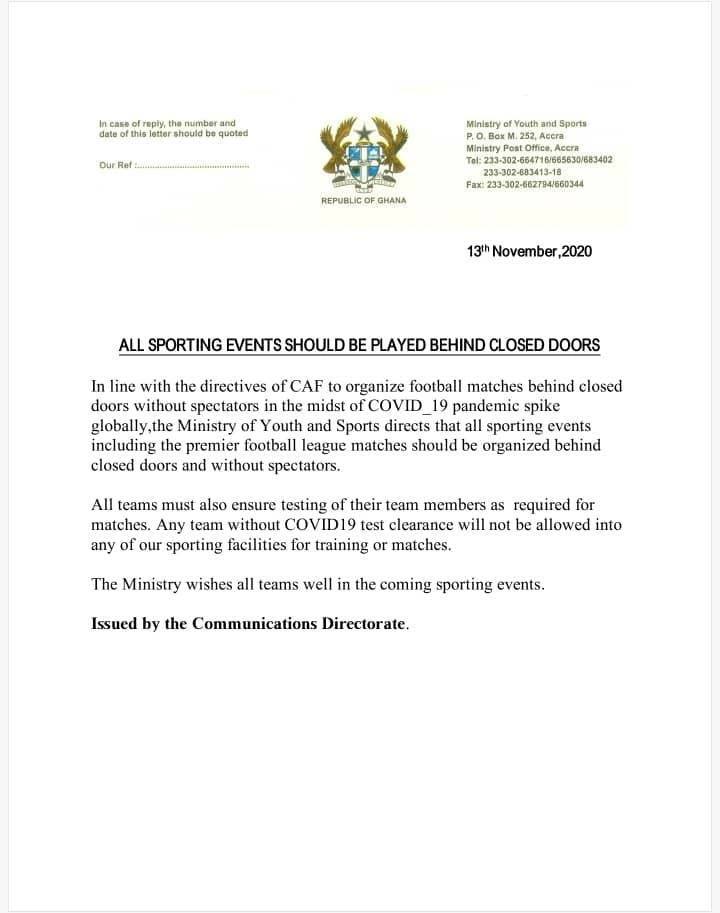 In a Facebook post on November 14, Ameenu Shardow dismissed reports that the Confederation of African Football (CAF) has issued such a directive. 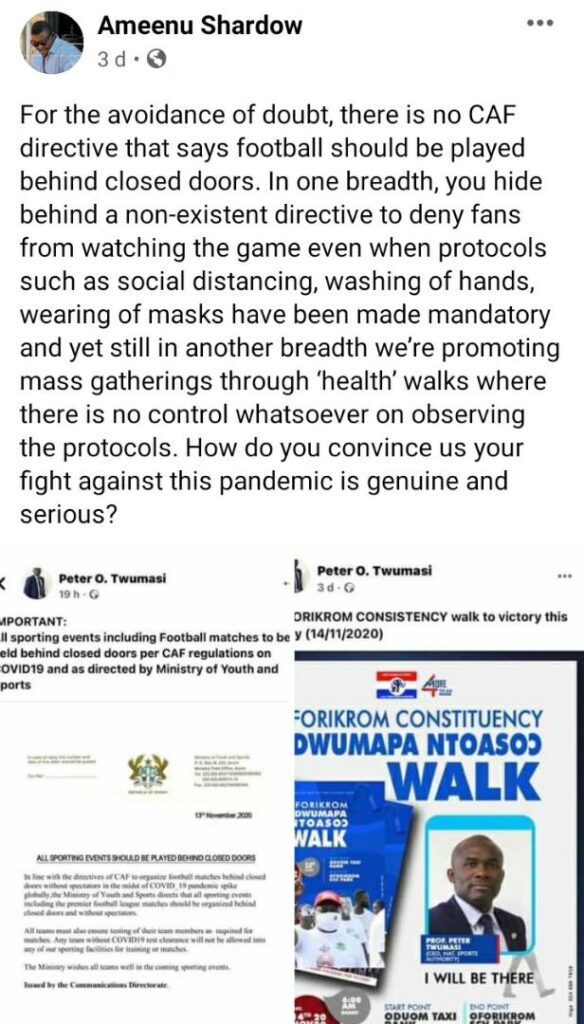 A screenshot of his post was republished on the verified Facebook page of musician and social media activist, Kwame Asare Obeng popularly known as A Plus, to his more than 346,000 followers.

This fact-check report will seek to verify if the Confederation of African Football (CAF) has issued any directive for football to be played behind closed doors.

According to the Confederation of African Football (CAF) COVID -19 protocol, all matches are to be played without spectators.

The CAF protocols published on November 10 forms part of wide-ranging technical guidance that further demands that, “If the host association’s government approves that matches can be played with fans, the host federation must obtain an approval from CAF.”

One can independently verify the Confederation of African Football (CAF) Covid -19 Protocols by visiting the CAF website– News Center/COVID-19/ Frequently Asked Questions for the return to Football.

“Wearing face masks covering the nose and mouth is mandatory at all times while in the stadium with the exception of the players during training/warming up and during the match,” the protocol demands.

All attempts via phone calls to reach the General Manager of Dreams Football Club, Ameenu Shardow and present him with our findings proved futile. However, this report will be updated if we get a response.

In Burundi and Tanzania, a limited number of fans are allowed in the stadiums after the football federations in the respective countries set out strict guidelines that fans had to follow in order to be allowed entry.

Burundi was the first African nation to resume league football in the Covid-19 era in May, followed by Tanzania in June.

The Confederation of African Football (CAF) in a June 12 report acknowledged the presence of football fans during matches in Tanzania, however, the CAF COVID-19 protocols were only published on November 10.

Initially, Ghana’s President Nana Akufo-Addo had announced that “seating at all stadia will be limited to twenty-five percent (25%) capacity to ensure social distancing.” However, this was reversed following the statement issued by the Ministry of Youth and Sports.

The claim that there is no CAF directive that football matches be played behind closed doors is False.

The Gold Kacha of Konongo

The Ghanaian Dream in Wassa Akropong

The Gold Kacha of Konongo

The Ghanaian Dream in Wassa Akropong

A Livelihood Under Siege in Ghana